PagerDuty has two tiers of user roles depending on your account's plan. To determine which tier your role belongs to, click the User Icon in the upper right of your account and select My Profile. If you see a tab that says Permissions & Teams, please continue to use this article for reference. If you only see the User Settings tab, please visit our article on User Roles.

Advanced Permissions allow you to specify the team-wide role that a user has on any given team, and also the level of access a user has to incidents and configuration objects (services, escalation policies, and schedules).

Advanced Permissions are available to customers on our Business and Digital Operations plans. Please contact our Sales Team if you would like to upgrade to a plan with this feature.

If you are already on a Business or Digital Operations plan but do not yet have advanced permissions enabled, contact PagerDuty Support to request enablement.

Otherwise, if advanced permissions are not available to you, you can still use Basic User Roles to control what level of access your users have in your PagerDuty account.

With advanced permissions, there are three different types of roles: base roles, team roles and object roles. Each role is unique and dictates what a user has access to.

All users in an account have a base role, and when a new user is added to an account, they must be assigned one. A base role indicates the default level of access a user has to incidents and configuration objects across the entire account.

Each base role is described below with an indication if they are fixed or flexible in parenthesis:

Below are two general lists of actions each base role can take divided by flexible and fixed roles. For flexible base roles, the table indicates the level of access each role has by default on an account before being given more or less permissions via a team or object role.

The lists below are not exhaustive, and you can check the Required User Permissions callouts on each feature's article to find out what permissions are required.

** Limited Stakeholder and Full Stakeholder subscriptions to incidents are only available on our new Business plan and Digital Operations plan. Please contact our Sales Team if you would like to upgrade to a plan with this feature.

To find your base role, click the User Icon, select My Profile, and then select the Permissions & Teams tab.

The Team Responder base role was deprecated as of 4/26/19. All users with this role have now been changed to a base account role of observer and their team roles will stay the same.

When a user is added to a team, they will also be given a team role. A user’s team role indicates the level of access that they have on that specific team. There are three different types of team roles:

** Users with flexible base roles (Restricted Access, Observer, Responder, Manager) can have their default team roles changed to grant them more more or less permissions on a specific team.

To find your team role, click the User Icon, select My Profile and then select the Permissions & Teams tab. Users may also have a primary team, which some organizations may need for billing purposes. Please read our section Manage Primary Team for more information.

Objects roles are specific levels of access given for specific configuration objects (a schedule, escalation policy, and/or service) to an individual user. There are three types of object roles: Observer, Responder, and Manager.

To find your object-level role(s), click the User Icon, select My Profile and then select the Permissions & Teams tab.

How Base, Team, and Object Roles Work Together

Base roles establish the level of access that a user has to everything across the entire account, whereas team and object roles gives users more or less access to specific configuration objects and incidents than what they would have access to at the account, or base role, level.

Base, team, and object roles can be managed by different users on the account based on their level of permissions.

Users with an Account Owner or Global Admin base role can update other users’ base roles.

To update a user’s base role, go to the Permissions & Teams tab on their user profile and click Edit next to their Base Role.

Users with an Account Owner, Global Admin, or Manager base role can update other users’ team roles. Users with a Manager team role can also update the team roles of users, but only for users on their team. 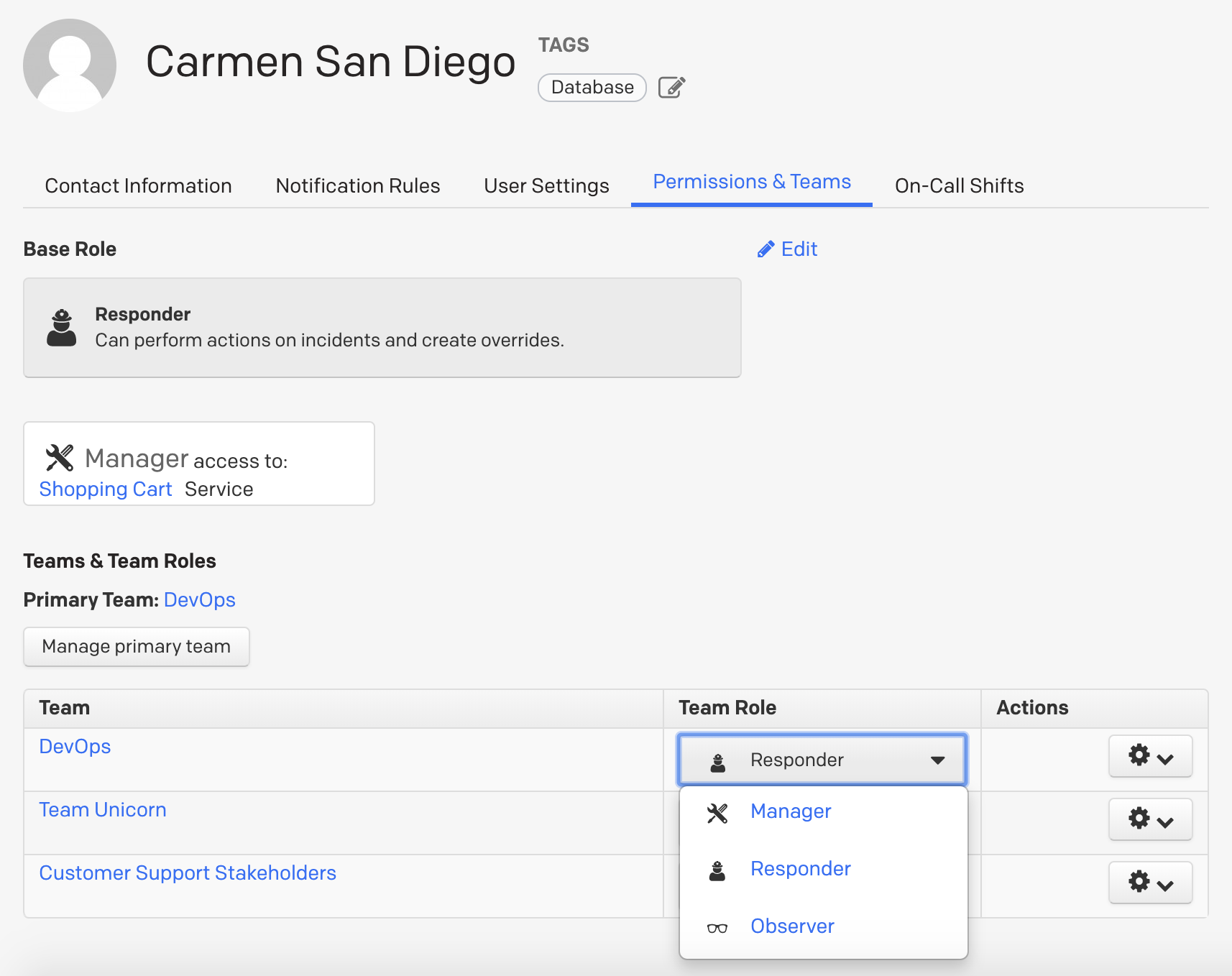 Users with a Manager team role are only able to update a user’s team role from their team’s page. Navigate to the People menu and select Teams, then click on your Team, select the Users tab and then select the appropriate role under the Team Role column for that user.

If a user is not yet part of a team, please visit our section on manually adding users to a team.

Users with an Account Owner or Global Admin base role can update other users’ object roles. Note that object roles can only be given to users with a flexible base role (i.e. Restricted Access, Observer, Responder, Manager).

To update a user’s base role, go to the Permissions & Teams tab on their user profile and click Edit next to their Base Role.

Under Additional Permissions, assign an object role to a specific schedule, escalation policy, and/or service. 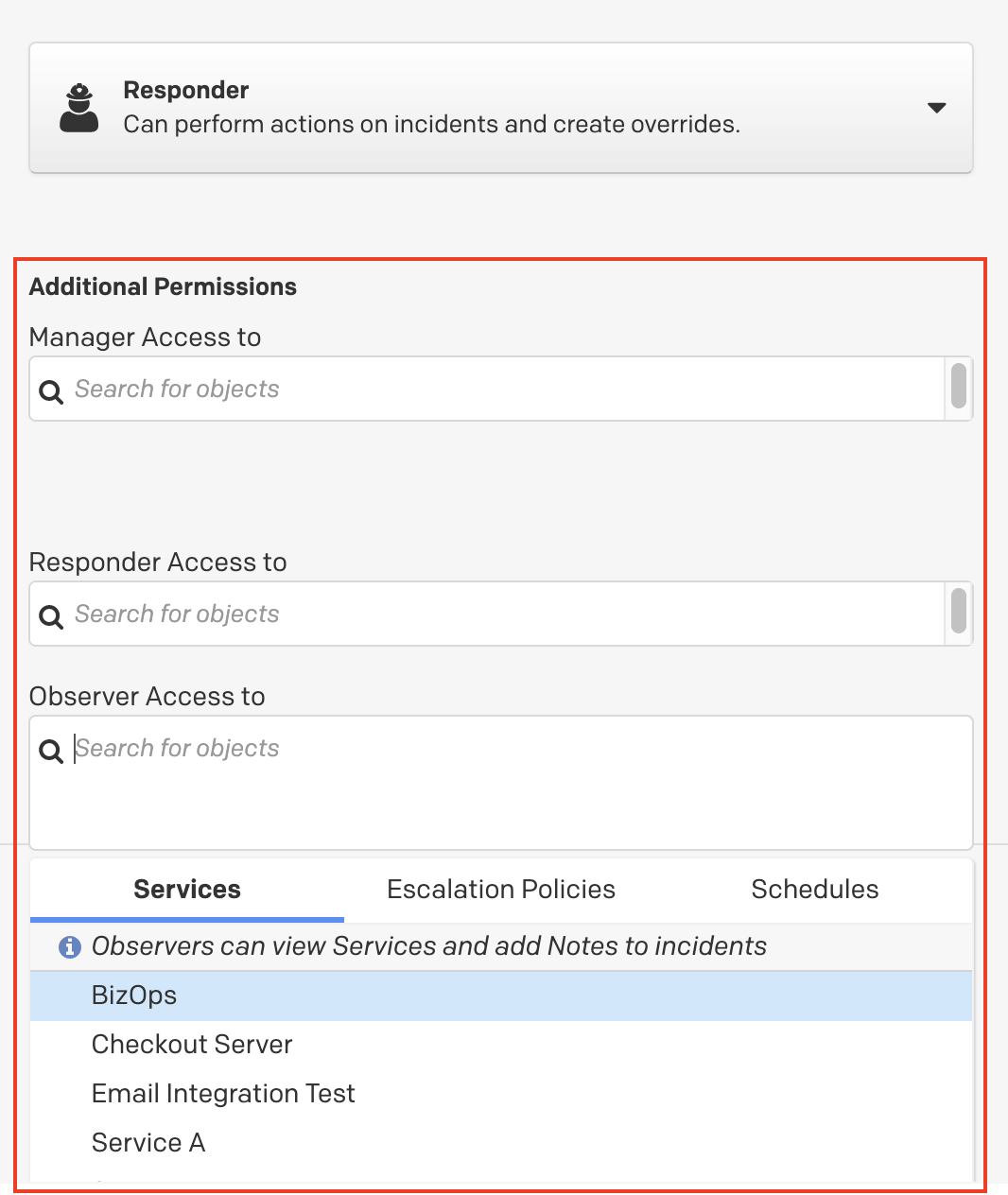 With advanced permissions, teams have the option to be set to Private or Public. By default, all teams are public.

When a team is set to private, users who are not part of that team:

Note: Team privacy does not currently apply to the following pages or configuration objects:

To update a team’s privacy, navigate to the People menu, select Teams and then click on your desired Team. Navigate to the Users tab on that team’s page and set the External Visibility to either public or private.

Responding to Incidents From Other Teams

* These Users must be directly assigned to the incident to take action on it. They should show up under Assigned to when viewing the incident in the UI, or Assignees in the REST API.

** A user with an Observer or Restricted Access base role and no team role or object role specified for the Network Operations team or its objects.

With that being said, if there is a user who needs to be able to respond to incidents for all or multiple teams, make sure that the user has either of the following:

All users can create personal REST API keys or tokens on the User Icon My Profile User Settings page of their user profile. Keys or tokens created this way will provide access to the REST API that matches the user’s permissions.

For example, a user with the base role of Manager can create a personal API key that will allow them to edit a schedule. However, they will not be able to add new users to the account because their level of access dictates that they cannot do this.

Global API access keys (which can be either full access or read only) can be created and managed by users with a Global Admin or Account Owner base role.

When an account migrates from Basic to Advanced Permissions, most basic user roles are automatically mapped to advanced permissions base roles.

Please note there is not an Observer role on Basic Permissions.

Roles in the REST API and SAML

When provisioning a user through the REST API or SAML, the user will by default be given the Manager (a.k.a. User) role, unless specified in the user's role property. The value set for it must be one of a set of fixed values that is recognized by our internal APIs, or our web services will respond with status 400 Invalid Request.

The values of the role field of user records, and also the permissions system, are as follows:

** Cannot be created through API / SAML

We’re currently having some issues with our infrastructure. Please check back soon to see if this has been resolved. Learn more