Legacy Lite and Basic plans do not have access to Dynamic Notifications. If you would like to use to this feature, please contact our Sales team to switch to any of our current plans.

Alerts in PagerDuty can be generated with a severity field. These severity values can be directly provided from the triggering monitoring tool, or set using event rules.

When an incident is generated from an alert, the alert’s severity field is used to determine the urgency level. The values of this field must be one of the following: critical, error, warning, or info. Note that this is case sensitive, so Info will not work. Urgency mapping works as follows:

A failure in the system's primary application.

Any error which is fatal to the operation, but not the service or application.

May indicate that an error will occur if action is not taken.

Uses low-urgency notification rules and does not automatically escalate.

Low (if appended to an incident; we recommend suppressing info alerts)

Uses low-urgency notification rules and does not automatically escalate.

Severity to Urgency mappings are hard-coded (as shown below). Any incoming events that do not contain a Severity will default to High Urgency. 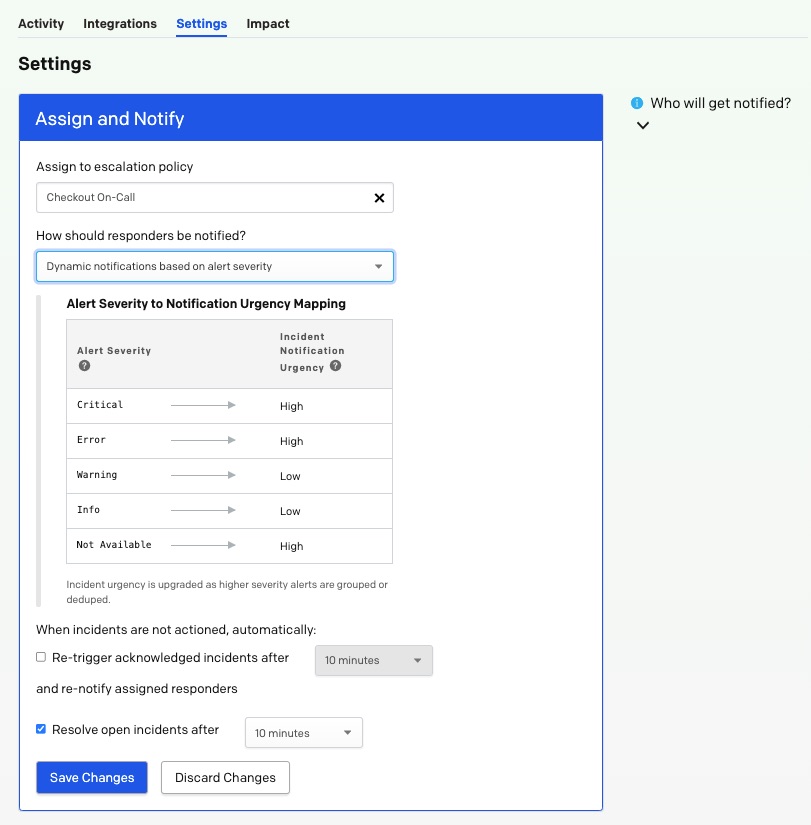 In order to use this capability, go to a Service’s settings page and switch “How should responders be notified” to “Dynamic notifications based on alert severity”: 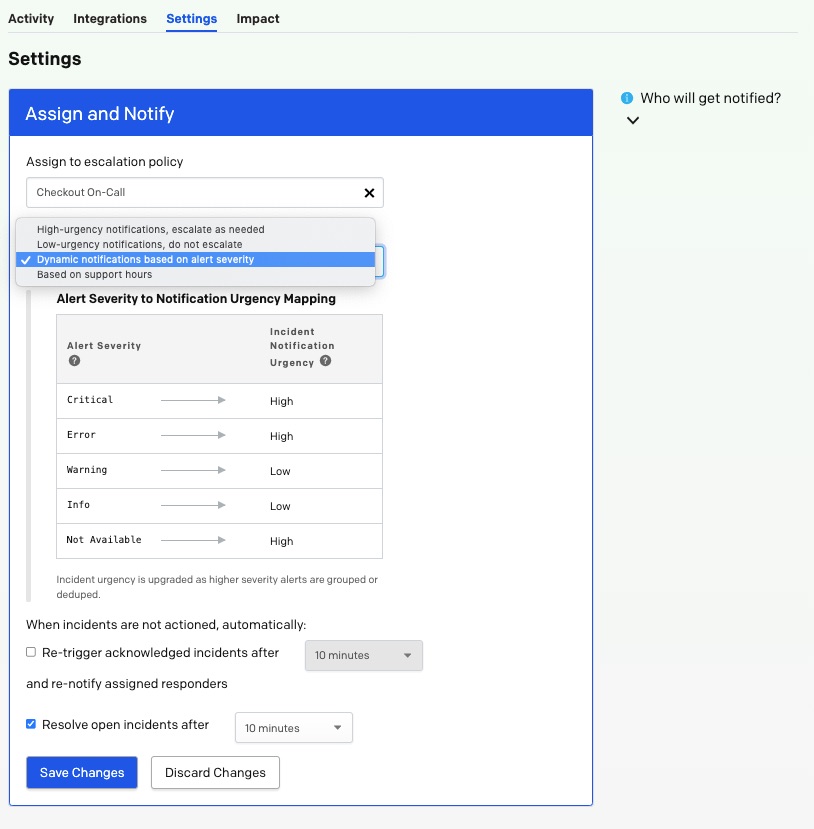 Any alert-created incidents on the service will now determine their notification urgency according to the Severity of the alerts that create them. When an alert is added to an incident, or when an alert’s severity changes, it will also update its corresponding incident’s Notification Urgency, but only upward. For example, an alert changing from Warning to Critical will change the associated incident from Low to High, but another change from Critical to Warning will not down-urgency the incident.

Non-alert incidents, such as those manually triggered or triggered through the Create Incidents API, will always have their urgency set by the service’s setting.

Users can also take advantage of Dynamic Notifications in relation to defined support hours on a service. Defined support hours can be configured by selecting Edit next to the Assign and Notify settings in the Settings tab within the service in question. 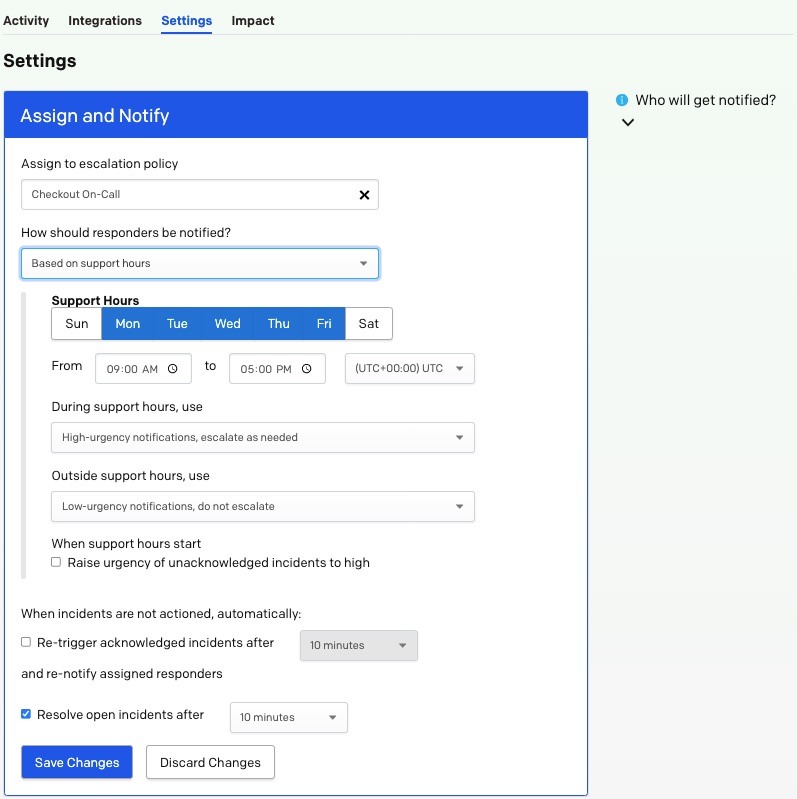 Customers can also base their Notification Urgencies off of time of day. Here, the user can set specific support hours, and decide how they want to be notified inside and outside of this time window. The user can select either High, or Low, or Dynamic Notifications. When support hours end, users also have the option to either leave Incidents at their current Urgency, or raise the Urgency of all triggered incidents for the Service to High.

If multiple trigger events come in for the same alert, the alert will upgrade its severity value to the most severe value. For example, if an alert was initially triggered by a Warning event, but then a Critical event comes in, the alert will now be Critical, and the associated incident will change from low urgency to high urgency. If a subsequent Info event comes in, the incident will remain High Urgency. It will not downgrade to Low.

There are three ways in which multiple alerts can be “bundled” into a single incident. First is by using our Alert Grouping feature. Here, users can group alerts for a set period of time, or until the incident resolves. While Grouping is activated, subsequent alerts will roll-up under the single incident. The incident will adopt the Notification Urgency that corresponds with the most severe alert that is grouped with it.

The second way alerts can be "bundled" is by manually merging their parent incidents. Below is an example of two alerts that have been merged into a single incident. In this example, the urgency of each alert was raised to High by the merge: 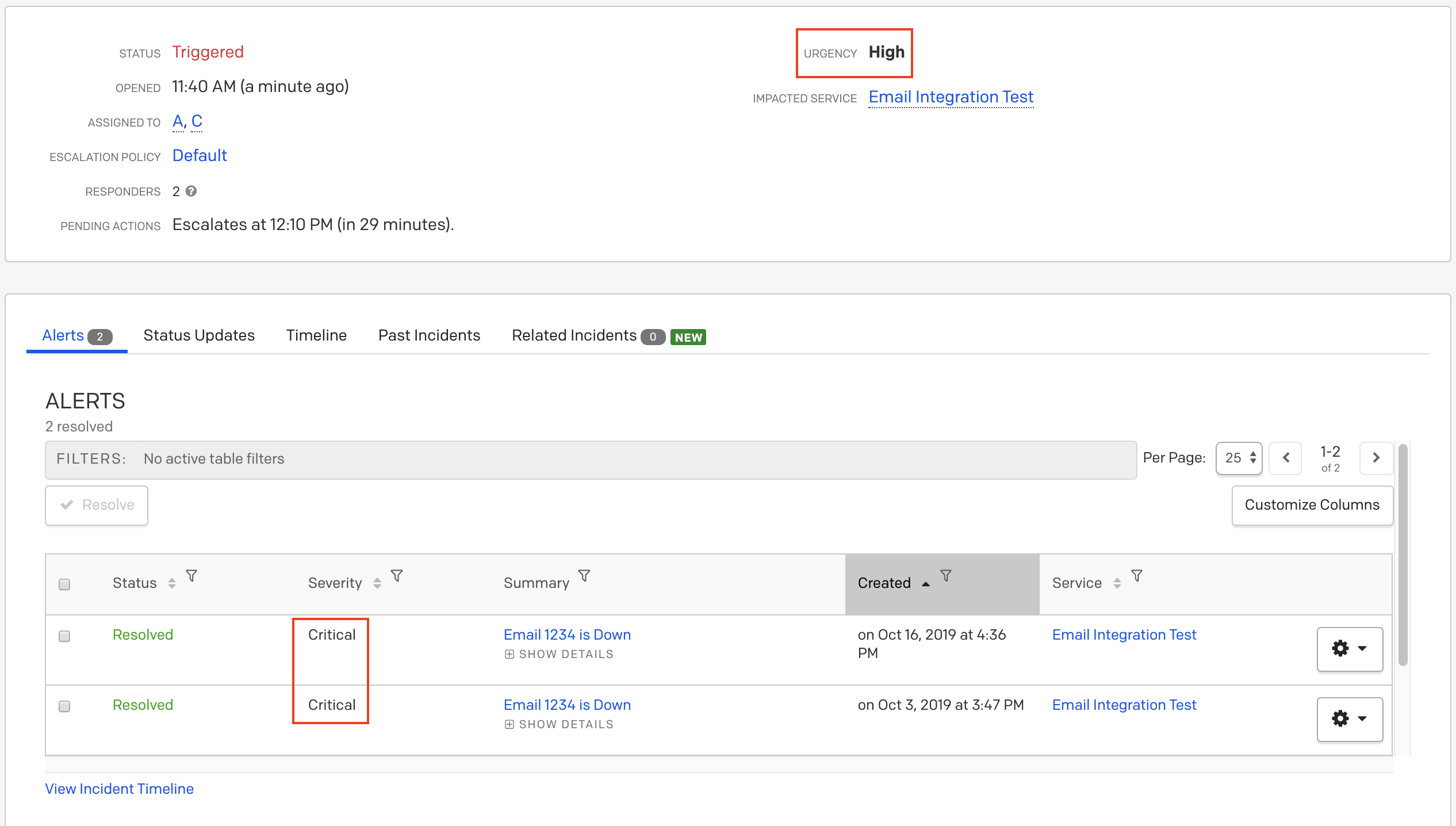 The third way alerts can be “bundled” to a single incident is using an alert dedup_key. Using a dedup_key, a subsequent alert trigger will replace an existing alert.

For integrations already mapped to the PagerDuty Common Event Format (PD-CEF), alerts of varying severities may be generated by default. For most integrations, however, alerts are generated as Critical by default, and event rules must be used to set the desired severity.

How does this interact with Incident Priority?

Incident Priority and Incident Urgency are separate properties that today, do not influence each other. Currently, Priority can be set manually by users on an existing incident, during incident creation via manual creation, with the Incident Create API or it can be set via event rules.

What if an alert does not have a severity attached?

Alerts created prior to November 2016 may not have severity information attached. However, since then, all alerts are generated with severity, and default to Critical if the severity is not specified by the emitting system, by event transformer, or by an event rule. Events sent to the new Events API v2 must have severity specified.

What about Email Integrations?

Service level email Integrations will also not send in Severity. We are currently scoping out work to allow users to set Severity for email integrations.

Use Global Rulesets as an email integration key to add severity and incident priority via global event rules.

Can I customize the mapping of severity to urgency?

As of the current date, mappings are not customizable. We intend to build this capability into the platform in future iterations of this feature.

How do I set urgency if the monitoring tools does not sent it to PD?

You can use the Event Rules engine to set a Severities for incoming alerts on a Service.

How does this relate to PagerDuty CEF?

How does this relate to Alert Grouping?

Users can group alerts into a single incident, either over a specific time period, or for as long as the incident is open. As new alerts bundle into an incident, we will upgrade the incident urgency to the most severe alert. We will never downgrade an incidents urgency.

Updated about a month ago

We’re currently having some issues with our infrastructure. Please check back soon to see if this has been resolved. Learn more